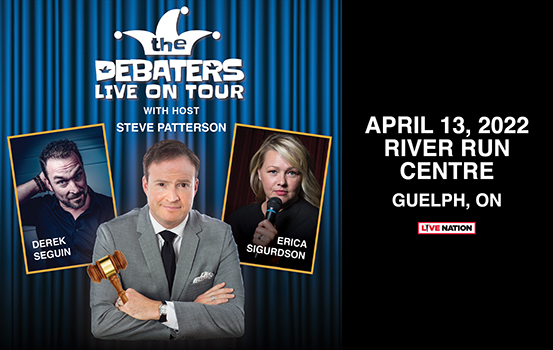 The Debaters Live On Tour

The Debaters Live On Tour

The Debaters Live On Tour is the comedy stage show where comics go toe-to-toe in a battle of laughs and logic and the audience picks the winner.  Award-winning comedian and host Steve Patterson and two of Canada’s top headlining stand-up comics, Erica Sigurdson and Derek Seguin, delight crowds with an exhilarating exchange of facts and funny.

Before the debate portion, The Debaters Live On Tour gets the hilarity rolling with a segment of smart stand-up comedy from each of these world-class comics.

These all-new comedic clashes are for live audiences only and will not be recorded for broadcast. No two live shows are alike so get your tickets now for a once in a lifetime experience.

Due to the spontaneous nature of live performances, some language may be inappropriate for younger audience members.

There is an 8 ticket limit for this event. Orders or combinations of orders exceeding the limit per person, account, household, or credit card may be cancelled without notice.

Everyone must have a ticket, including children. Infants will not be admitted during this event. No refunds offered for this event.